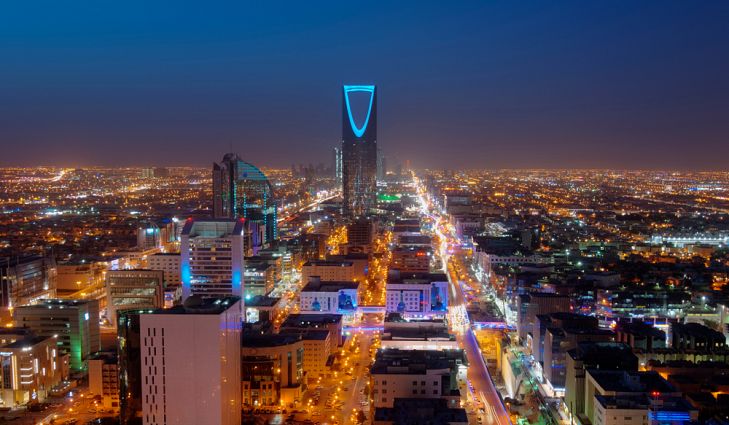 Location: The Kingdom of Saudi Arabia lies at the furthermost part of southwestern Asia. It is bordered by the Arabian Gulf, United Arab Emirates and Qatar in the east; Red Sea in the west; Kuwait, Iraq and Jordan in the north;  Yemen and Oman in the south.

Area: The Kingdom of Saudi Arabia occupies about four-fifths of the Arab Peninsula, with a total area of around 2,000,000 square kilometers.

Geographical Features: Because of its large area, the Kingdom has a diverse topography. The Tihama coastal plain which lies along the Red Sea, is 1,100 kilometers long, 60 kilometers wide in the south and gradually narrows to the north until it reaches the Aqaba Gulf. To the east of this plain, lies a chain of mountains called Sarawat. These mountains rise to 9,000 feet in the south and gradually fall to 3,000 feet in the north. Several large valleys slope eastward and westward from these mountains. They include Jazan valley, Najran valley, Tathleeth valley, Bisha valley, Himdh valley, Rumah valley, Yanbu valley and Fatima Valley. To the east of the chain stands the Najd Plateau which extends eastward to Samman Desert, Dahnaa Dunes and southward to Dwaser valley. This region is parallel to the Empty Quarter Desert and stretches northward to Najd plains, passing through Hail until it connects with the Great Nefud Desert, then to the borders of Iraq and Jordan. There are also some mountains in this plateau such as Twwaig, Al-Aridh, Aja and Salmah mountains. The Empty Quarter in the south-eastern part of the Kingdom occupies an estimated area of 640,000 square kilometers composed of sand hills and lava fields. The eastern coastal plain is 610 kilometers long and consists of large sand areas and Salinas.

Climate: The climate of Saudi Arabia varies from one region to another because of its diverse topographical features. As a result of a subtropical high-pressure system, the Kingdom is generally hot in summer and cold in winter where rains fall often. Moderate climate is seen in the west and the southwestern part of the Kingdom; dry hot summer and cold winter in the interior parts; and high temperature and humidity in the coastal areas. Major parts of the Kingdom usually receive scanty amounts of rain in winter and spring. However, in the summer, rainfall is significant in the southwestern mountains. Humidity is high on the western coasts and mountains almost all year and it gets lower as we go inland. The Administrative Division of the Kingdom Under the system of regions issued by the Royal order No. (1/92), dated 27/08/1412 H., the Kingdom has been divided into (13) administrative regions. Each one of them is divided into a number of governorates differentiating in number from one region to another. And each governorate is divided into centers linked administratively to the governorate itself or the emirate. The emirate, governorate or center includes a number of population settlements linked administratively to it...

National Day: The Kingdom of Saudi Arabia celebrates its National Day each year on September 23, in commemoration of the founding of the Kingdom by his Majesty King Abdul Aziz Abdul Rahman Al-Saud in 1932A.D

Why Book with us?

WhatsApp Chat is free, download and try it now here!